skip to main | skip to sidebar

Men should hold onto dongs 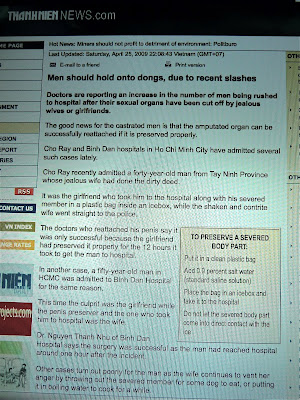 A classic article from Thanh Nien news - using some word play about the economic crisis and the name of the Vietnamese currency against the recent spate of penis dismemberment. I love the highlighted box on the right which gives a step by step guide to preserving a severed body part, especially the need for 0.9% saline solution. There are also some hilarious quotes in the article. One worth highlighting is from a doctor who undertakes the reattachment surgery - “Now that we’re experienced, the operation takes about two and a half hours. It used to take up to four hours.” Sounds like he is doing them everyday! Plus of course he adds that it is impossible to make the penis longer during the reattachment surgery.

The other doozy is when the jilted slasher does a better job of destroying the penis: "Other cases turn out poorly for the man as the wife continues to vent her anger by throwing out the severed member for some dog to eat, or putting it in boiling water to cook for a while.

Classically painful
Posted by simon kutcher at 9:44 am

That is a painful article to read..

When I read the subject line, I thought to myself "Why of course men should hold on to their money in Vietnam".

i love holding my dong

Funny article , but i think that the injured men has lost their sens of humour since :)